William Fraser, was the Resident and Commissioner of Delhi, and Agent of Delhi territory to the Governor General of India during the reign of the last Mughal Emperor Bahadur Shah II Zafar. He was the successor to David Ochterlony, and the predecessor to Sir Thomas Metcalfe as East India Company’s Delhi Resident. That was the time, when the British officers in Delhi donned native identities as ‘White Mughals’ : the Boston-born Sir David Ochterlony (1758 – 1825) was famed for having thirteen Indian wives, each of whom had a separate elephant to roam around the streets of Delhi, and embark on a march every evening between the banks of river Yamuna and the walls of the Red Fort.

William Fraser (1784-1835), his assistant and successor as Delhi’s Resident, continued his style in becoming another Indophile, being ‘very much a Scottish Nawab with his Indian harem and Mughal wardrobes.’

William Fraser was so enamored with the Indian courtly culture, that he began taking Persian and Arabic classes twice a week from Shah Abdul Aziz. He  developed a close friendship with India’s greatest Urdu poet Ghalib. He even gave up eating pork and beef so as to be acceptable to Hindus and Muslims alike. It is said that he fathered, ‘as many children as the King of Persia’ from his harem of ‘six or seven legitimate Indian wives.’

His massive Gothic villa, now known as the Hindu Rao Hospital, stood on the crest of the Ridge. It was said that it was built “at great expense on the very spot where Timur once pitched his tent during the siege of Delhi”.

The French traveler Victor Jacquemont described Fraser as, “half-Asiatic in his habits, but in other respects a Scot Highlander, and an excellent man with great originality of thought, a meta-physician to boot.”

During this time, in 1815 to be precise, William was joined by his brother James Baillie Fraser in Delhi after many years of separation. James had arrived in India in 1814  to set up a trading business in Calcutta, following financial problems at home. He was one of the five sons of a Scottish noble-man, Edward Satchwell Fraser, all of whom had journeyed to India. 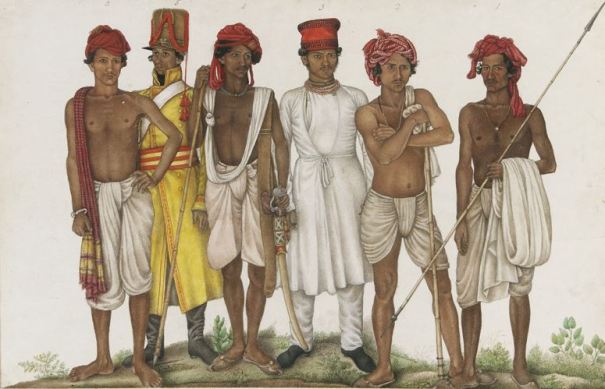 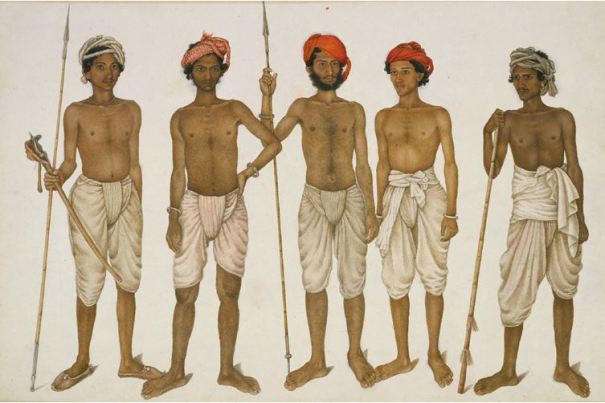 In Delhi, James employed local artistes to make paintings of William’s servants, troops, dancing girls, holy men and villagers etc and asked them to submit their artworks with his brother. James himself was a gifted landscape painter, and later produced  collections titled ‘Views in the Himala Mountains ( 1820 )’ after his exploratory tour of river sources in hillside of upper India with his brother William, and also, ‘Views of Calcutta and its Environs ( 1824-26 )’ after his subsequent posting there.  The below is plate 19 from James Baillie Fraser’s ‘Views of Calcutta and its Environs’. 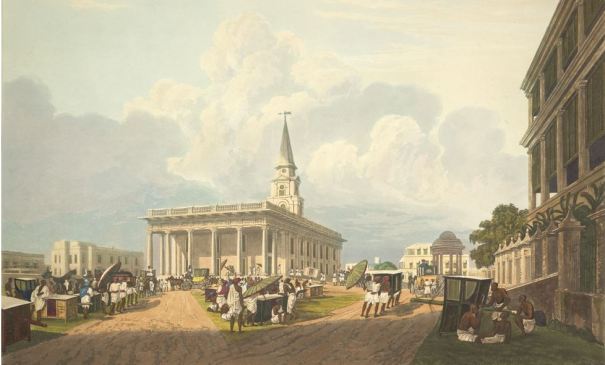 James was posted at Calcutta in 1816, but he asked his brother William to continue commissioning of paintings at Delhi.  William obliged the request and started taking local artistes along with him on his tours. James left India in 1820, with over ninety paintings with him, popularly known as the ‘Fraser Album’.

The Fraser brothers  involved renowned local artists such as Ghulam Ali Khan,  his nephew Mazhar Ali Khan, and other members of his family to record the costumes and scenes of daily Mughal life, by means of miniature paintings. The practice of pictorial recording of Mughal culture continued by his successor, Sir Thomas Metcalfe, who commissioned the ‘Dehlie Book: Reminiscences of Imperial Delhi ’ in 1844, executed by the same Mughal painter Mazhar Ali Khan.

By that time, the Mughal court did not have enough finances to indulge in the arts and culture, so artist families like that of Ghulam Ali Khan were looking at prosperous noble-men and British officers, like the Fraser brothers, the Scottish-Rajput mercenary James Skinner, Nawab of Jhajjar, and so on. Ghulam Ali Khan was undoubtebly the greatest painter of those times, and in one of his pictures, he describes himself as, “the hereditary slave of the dynasty, Ghulam Ali Khan the portraitist, resident at Shahjahanabad.”

Joseph M. Dye III in the book ‘The Arts of India -Virginia Museum of Fine Arts’ describe the two types of paintings found in the Fraser Album. The first category is the intensely realized figural studies against a minimal background. The second category is complicated village scenes created in  spatial stages. I am grateful to Virginia Museum of Fine Arts for sending me scans of relevant pages of the book.

The VMFA painting of a water buffalo standing in a picturesque Haryana village scene depicts a place called Rania, where  William’s mistress Amiban lived, along with their two Anglo-Indian sons and a daughter.

“The foreground, middleground, and background are skillfully organized to create a sense of spatial recession: individual pictorial elements are subtly modeled; and the sky, with its softly rendered clouds, as well as the turbaned figure leaning against a horse on the far left, are almost certainly derived from European sources”, he writes, “Nowhere are the visual objectivity and poetic feeling that define Company art in Delhi more effectively conveyed than in paintings from the Fraser Album.”

Such close relationship and attachment of a British officer with native life is remarkable indeed, and he himself wrote that the images recorded “recollections that never can leave my heart.”

Each of the miniature painting was a work of great detail, painstakingly executed with single squirrel-hair fine brushes to capture even single hair strands of the subjects. The painting style was as if to produce some sort of botanical illustrations of the subjects, detailed yet detached, capturing people of various castes and tribes, and producing the characters like they were some kind of  unique specimens for the curious eyes of British patrons.

The paintings were done against a stark white background for the desired effect against a void or minimal backdrop, so as to make their appearance look more ‘real’ than they were in reality.

Maybe, it was somewhat like  our dream sequences where the features of subjects in our dreams are so detailed as if our subconscious mind tries to convince us that it is the real world by portraying features that we may in fact be missing to notice if awake. Surely, our vision is an imperfect filter, taking in only three frames per second, and then imagining the rest in our brain to create a holographic visual. The subconscious mind is something we are far from understanding. But that seems to be the way a perfect artist likes to draw to imitate the subject on paper, but going beyond the features that we usually notice, thus producing masterpieces.

This new genre of painting was referred popularly as ‘Company School’ painting because of the patronage of East India Company officials, where the Indian painters modified their techniques to cater to the tastes of their British promoters and clients. The style was a mix of close representation of visual reality without the accuracy of a photograph, along with the stylization of medieval miniatures. The artistes began painting in water-colour, and used pencil or sepia wash on European paper. The result was a unique fusion technique of the West with the East. The paintings were hallmark of hypnotic attention to detail, glowing in the brilliance of gem-like colours.

Mazhar Ali Khan was a maestro who also executed  one of the greatest masterpiece of Company Art: a 45-feet long panoramic depiction of 1852’s Delhi, with the Red Fort at the center of the painting, presently at the India Office Library in London.

William Fraser was assassinated  on Sunday evening the 22 March 1835 at the age of 51, at the very steps of his own Residence, by Kureem Khan, noted for his excellent marksmanship. It is said that the assassin had fixed the horseshoes into the hooves of his horse in reverse, so as to mislead the investigators, who initially thought the marks on the ground suggested a horse descending from the location of the crime instead the assassin going up.  Mirza Ghalib wrote on Fraser’s death, “I lost again a second father. His Fraser Album, is regarded as the last great monument of the Mughals.”

Sir Thomas Metcalfe thus describes the event in his Reminiscences of Imperial Delhi.

“William Fraser Agent to the Governor General of India and Commissioner of the Dehly Territory was assassinated within a few yards of his own Residence on Sunday Evening the 22nd March 1835 about ½ past 7 o’Clock when returning from a Visit of Ceremony to Maha Rajah Kulleean Singh Chief of Kishengurh, then residing in our City.
The act was committed by one Kurreem Khan noted as an excellent Marksman and employed by the Newab Shumsooddeen Khan of Ferozepoor for this very purpose.
The Assassin rode up in the rear of his Victim and when nearly in a line discharged the contents of his Carbine into the right side. Death instantly ensued. One slug having passed quite through his body while two others perforated in far as the outer skin of the opposite side.
Kurreem Khan was executed on the 26th August following and the Newab on the 8th of the following Month and never was the hand of Providence more signally displayed than in the means vouchsafed to the Local Officers of Government in unravelling this daring deed of Villainy.
The remains of this estimable and deeply lamented Individual were at first interred in the Burial Ground within the City but subsequently removed to within the Area surrounding St. James Church by the old and faithful Friend of the deceased Colonel James Skinner C.B. by whom also was erected this suitable monument.”

The Fraser paintings were all but forgotten, till they were chance-discovered in 1979 in Scotland, and it immediately caught the attention of scholars and art connoisseurs. M. Archer and T. Falk write, “Technically these drawings surpass all other Company pictures for the delicate realism, characterization and subtle composition of groups.”

The record of ownership of the Fraser’s Album is as below:William and James Fraser, India and Scotland, 1816-56; followed by the Fraser Family, Scotland, until late 1970s.

5 thoughts on “Fraser and Skinner: Men of Field and Fine Arts”